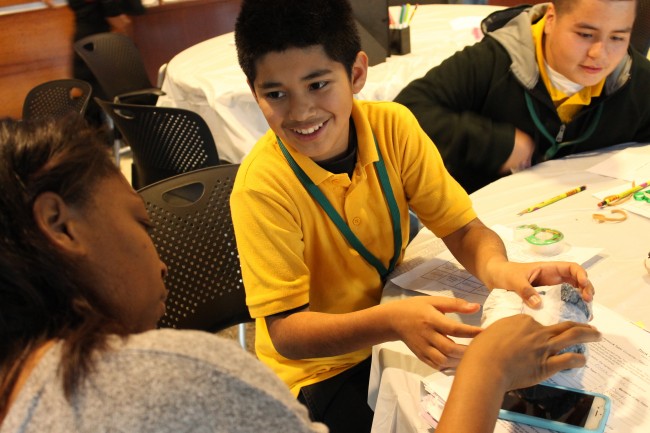 Center for BrainHealth™ experts banded together with several Dallas public middle schools to bring together kids who are all trying to accomplish the same thing – think SMARTer.

Center for BrainHealth™ experts banded together with several Dallas public middle schools to bring together kids who are all trying to accomplish the same thing – think SMARTer.

During the SMART Think Tank, students divided into teams to engineer a protective casing for an egg-drop competition. They listened to a presentation on concussion science and then built on what they had learned from the competition to design and present ideas for new helmets. Students toured BrainHealth to learn about the brain, how EEG and fMRI are used in research, and experienced the latest immersive virtual-reality technology used to develop new cognitive training programs at BrainHealth.

“This is a chance for students who have been through the SMART program to practice the cognitive processes that help them think at a deeper level,” explained Dr. Jacquelyn Gamino, SMART co-creator and director of the Adolescent Reasoning Initiative. “These are all kids who are potentially destined for greatness and who are interested in promoting their own brain health and their cognitive abilities,” said Dr. Gamino.

“Many of them may not think they’re very good at school, but the SMART program helps them understand how best to learn, and they have the tools to succeed academically as a result.”

Since its inception in 2009, the Adolescent Reasoning Initiative has been tested, implemented and expanded to include more than 50,000 youth, 300 teachers and 125 administrators in five states. Participating teachers are trained in the principles of SMART, which helps students develop skills for how to learn, instead of what to learn.

Students who have completed the classroom-based SMART curriculum and want to do more with the strategies are invited to participate in an after-school group to practice their learning skills.

“We want to help students become the innovators of the future,” explained Janet Koslovsky, an assistant director of the Adolescent Reasoning Initiative. “We want them to have confidence in their ability when they get out of school or go on to college or vocational school; our goal is for them to be successful contributors in whatever they choose.”