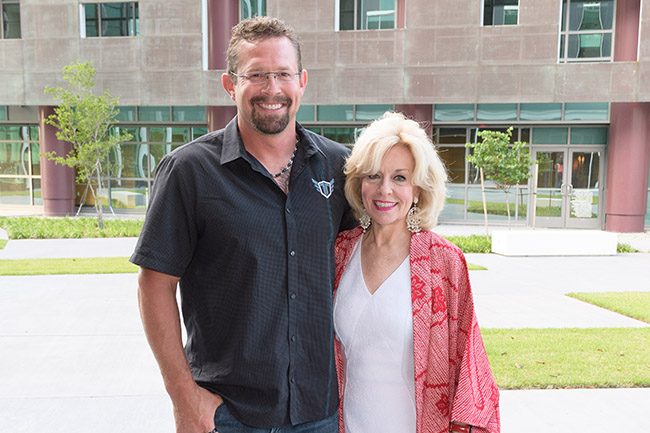 On May 19, John “Tig” Tiegen, veteran of the U.S. military and Central Intelligence Agency (CIA) and contributor to the New York Times bestselling book, 13 Hours: The Inside Account of What Really Happened in Benghazi, shared his intense story about saving lives, the ensuing mental challenges, and his journey back to stronger mental health. The lecture was generously sponsored by Fluor Corporation as part of a special Highland Capital Management Warrior and First Responder Reunion event.

A former sergeant and infantry squad leader, Tiegen applied his military training as a security protection contractor on missions in Afghanistan, Pakistan, and Iraq. He was an essential part of the rapid response to the terrorist attack on the American diplomatic compound in Benghazi, Libya on September 11, 2012, which left four Americans dead.
Tiegen participated in the Center for BrainHealth’s high-performance brain training program after transitioning back to civilian life. He knows firsthand the challenges faced by those who serve our country and communities in high-stakes roles.

Before the lecture, warriors and first responders were invited to a special reunion, with food and beverages, live music, and information from the Brain Performance Institute’s Veteran Service Organization (VSO) partners. This event, which was conceptualized by the Brain Performance Institute’s philanthropic partner, Highland Capital Management, aimed to bring awareness to the physical and emotional impact that first responders, law enforcement personnel, military veterans and many others experience.

“There were a number of motivations driving this event,” said Highland Capital Management co-founder and president Jim Dondero. “We not only wanted to celebrate the Center for BrainHealth’s work serving those who serve our country and city, but we also hoped to highlight the shared experiences of these groups and help build a broader peer network connecting the veteran and law enforcement communities.”

Dondero and his colleagues at Highland Capital were inspired by the calls to action put forth by the city’s current and former police chiefs: “DPD leadership has clearly expressed the need to have the best people in law enforcement roles, engaging with the communities they serve. Post-9/11 veterans have a wealth of experience that would be invaluable to our city’s police force, so we saw the opportunity to play a part in bringing these groups together.”