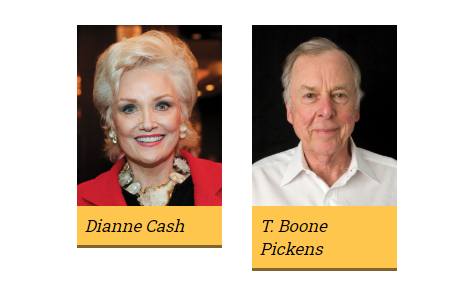 OVER THE PAST 50 or so years, The University of Texas at Dallas campus has evolved physically from a lone building in the middle of the Blackland Prairie just north of Dallas to a deliberate patchwork of research facilities, residence halls and academic buildings bustling with bright students, innovative programs and cutting-edge ideas. Three businessmen conceived the initial vision, but the ambitious transformation of UT Dallas into a top-tier research institution was made possible by forward-thinkers and generous supporters who made the University the rich mosaic that it is today.

In 2004, an economic development project known as Project Emmitt and led by Texas Instruments began pumping more than $300 million into the University to strengthen science and engineering programs.

The Center for BrainHealth opened a state-of-the art facility in Dallas in 2007 and expanded clinical and research programs, buoyed by significant gifts from supporters such as Dianne Cash and T. Boone Pickens.

In 2009, just two months after Texas law made the University eligible for Texas Research Incentive Program (TRIP) matching funds, 16 donors made gifts totaling nearly $17 million, including seven that were $1 million or more — the largest number of seven-figure donations ever received in a single day at UTD.