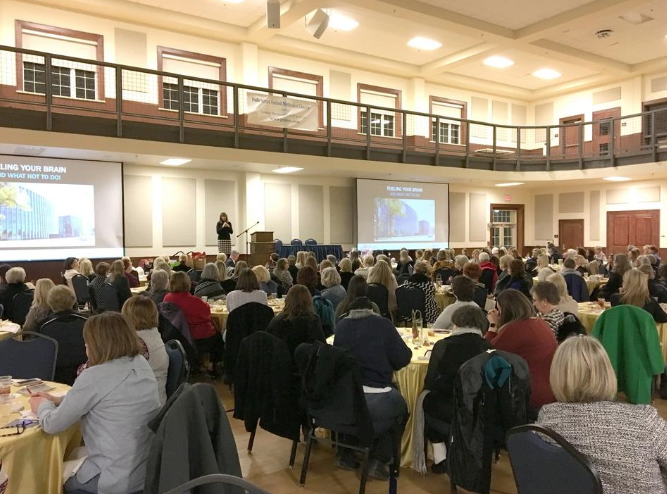 The Day of the Woman is part of an ongoing effort by the Laura W. Bush Institute for Women’s Health to encourage and empower women to take control of their health-care needs.

The Laura W. Bush Institute, created in 2007, funds research on sex- and gender-based medicine and other health initiatives. The featured speakers were Amarillo native Dr. Paul Proffer, owner of Proffer Surgical Associates, and Leanne Young, executive director for the Brain Performance Institute at the University of Texas at Dallas.

Proffer is an oculofacial plastic surgeon specializing in cosmetic and reconstructive procedures for the face and neck.

Young began her career conducting blast-injury research for the Department of Defense. Blast induced traumatic brain injury has become the most common type of military head injuries affecting close to 500,000 service members, according to the National Center for Biotechnology Information.

After 20 years at the DOD, she pursued a doctorate in cognitive neuroscience and joined the Center for BrainHealth as the director of the Brain Performance Institute.

After Proffer and Young each spoke from the podium, a panel discussion was held with Proffer, Young and Dr. Amy Stark, who is a psychiatrist at TTUHSC. The panel was moderated by Lea Wright, who is the community advisory board chair of the Laura W. Bush Institute for Women’s Health.

“It turns out over the last 100 years we have doubled our life span but not have increased our brain span,” she said.

Young said that when she graduated from high school in 1986, the United States was leading the charge in education, ranking either at the top or near the top in math, science and reading.

“Now we are average or below average in math, science and reading,” Young said.

She blamed this downgrade on our education system’s focus on “teaching to the test.”

“Our brains are not designed for rote memorization,” she said.

Instead, children’s brains need to be challenged with thinking and problem solving, she said.