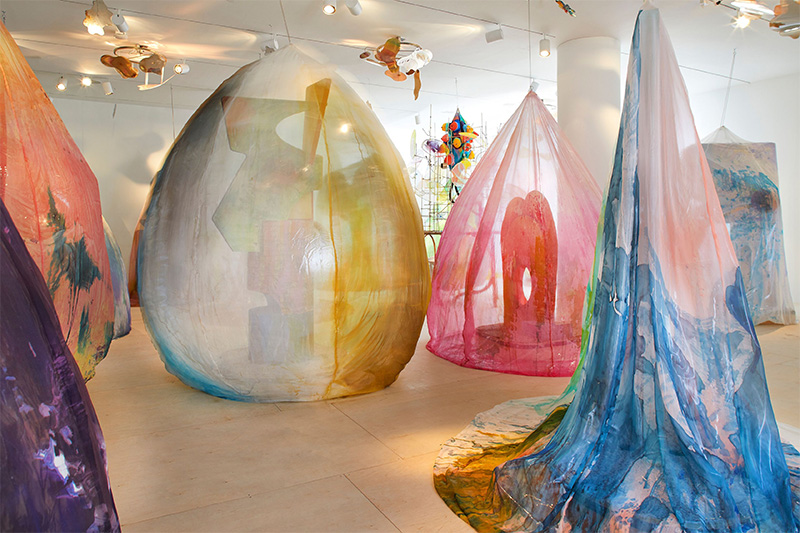 Think back to your first visit to an art museum as a child. Before entering, it’s likely that the first words out of the mouth of your chaperone were, “Don’t touch anything.”

It’s unlikely you’ll hear those words when stepping into the Dallas Museum of Art’s new exhibit, speechless: different by design, on view through March 22. 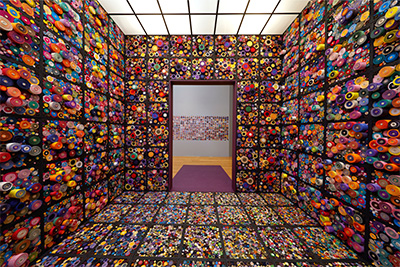 “Feel free to take off your shoes and lay down,” New York-based artists (and brothers) Steven and William Ladd say invitingly, as visitors peer into a room the size of a giant walk-in closet. Nearly every inch of the whimsical space is filled with scrolls of fabric of every shade of the rainbow. Some appear to be barely an inch wide. Others have a diameter of at least two or three inches. It’s like a tactile Klimt painting. Named Scroll Space, each rolled piece of fabric contains a small wooden dowel inside bearing the initials of the person who rolled it. Of the thousands of people who participated, approximately 1,000 came from Dallas, including participants from the Center for BrainHealth and the Callier Center for Communication Disorders at the University of Texas at Dallas. The walls of the room surrounding Scroll Space are adorned with photos of each person who contributed.

It’s one of the six works within speechless, an exhibit representing a crossroads of neuroscience and aesthetics, curated by DMA’s Sarah Schleuning, who says the idea came from a personal experience as the mother of a child with a communication disorder. “I’m deeply vested in this idea of how to use what I see as my superpower—which is to use design as a communicator—and think about how to use it without words. And that’s so much the genesis of this project.” 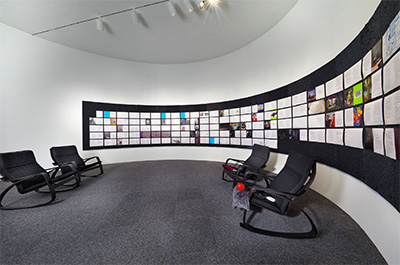 One of Schleuning’s first steps involved assembling a scientific advisory panel of eight local experts in fields of brain health, occupational therapy, speech pathology and communication disorders. Once the artists were chosen, she brought them together with the panelists in what she describes as a convening. “I wanted really interesting, creative thinkers, artists and designers—people who I felt would be really open to a project like this,” she says. “Then get them all together in a room and say, ‘Let’s share information and let’s learn and understand these different ideas together and see how building a community and building these networks can strengthen us.’”

Schleuning points out that there’s no linear path to the show, which is divided into six sections. The intent is to let the visitor pick their path of exploration. Near the Ladd brothers’ colorful space is a mysterious, dimly lit room with a large, black metal sphere in the center. Sound artist and designer Yuri Suzuki says his Sound of the Earth Chapter 2 aims to demonstrate how sound connects people. When a visitor places their ear against the surface, they hear recordings that were crowdsourced by people from different parts of the world, ranging from what sounds like busy shopping malls to quiet parks with chirping birds.  Though the black globe seems ominous at first sight, it’s the aural experience that creates the imagery of life’s art. 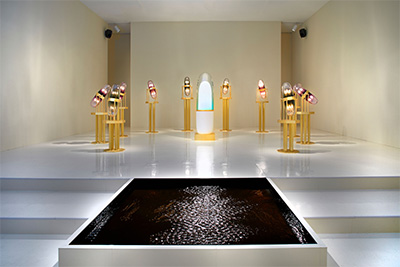 Ini Archibong’s theoracle is the subject of the speechless graphic resembling a microphone. Twelve oval-shaped glass objects fixed on brass pedestals contain bulbs that change color when pivoted. A custom synthesizer creates an ethereal soundscape of pure sound waves that gives the room a sense of humming electrical currents.  At the front of the room, a shallow square black pool of water ripples in response when visitors turn an obelisk, which tunes the sound to a range of bass tones.

The unique part about the remaining two projects within the exhibit is that they’re both centered around its creation. Graphic designer Laurie Haycock Makela documents the journey through a publication of conversations between the designers and Schleuning, while providing a visual story of the installations. Filmmaker and designer Matt Checkowski’s Glyph gives visitors insight about the other designers and their creative processes through recorded conversations, which are then translated by a computer and illustrated with images pulled from an internet search at the same moment. 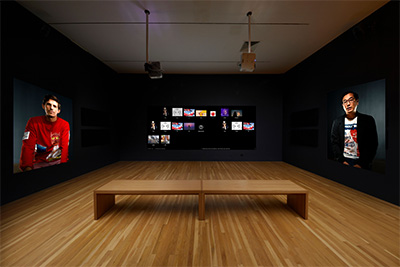 Schleuning says she set out to push the boundaries of what people think about art museums and how to explore the role of art and aesthetics in our daily lives. It’s deeply rooted in the idea that it’s for everyone, whether our differences are defined as a disability or not.