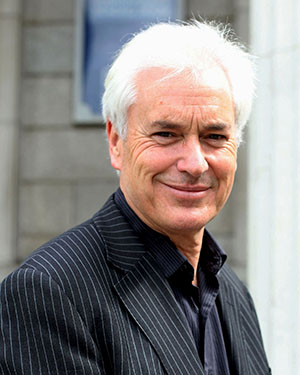 Ian Robertson, Ph.D., is the The T. Boone Pickens Distinguished Scientist at the Center for BrainHealth. Dr. Robertson is known for his translational research into human attention, brain plasticity and rehabilitation. His research at the Center for BrainHealth will investigate the possibilities of enhancing non-pharmacological interventions to improve cognitive performance and brain health.

Most recently, Dr. Robertson’s efforts as co-director of the Global Brain Health Institute focus on building a worldwide alliance to train future leaders in brain health who will shape policies and practices around the globe to enhance brain health and delay or prevent dementia.

Dr. Robertson is the current Chair of Psychology at Trinity College Dublin and was the founding director of Trinity College Institute of Neuroscience. He was a Fellow at Hughes Hall, Cambridge, is a visiting professor at University College in London, and has held senior academic appointments at Columbia, Cambridge, Toronto, Bangor and Padua Universities.

In addition to his work with the Global Brain Health Institute and his many academic appointments, Dr. Robertson has written more than 250 papers and several books, including co-authoring the leading international textbook on cognitive rehabilitation. In 2014, he was elected as a Fellow of the American Association for Psychological Science in recognition of his “sustained and outstanding distinguished contributions to psychological science”.